I have to start contributing more here!  I've always enjoyed the info and conversations.  Anyway, I've dove pretty deep into armagnac the last few years.  Without getting too deep into reviews here ar 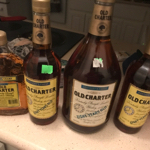 As I’ve changed jobs, one of my customers sent me a text last week saying, “I left you a gift at the front desk of the 4 Seasons”. On Monday I walked across the street from my office to pick my gift u